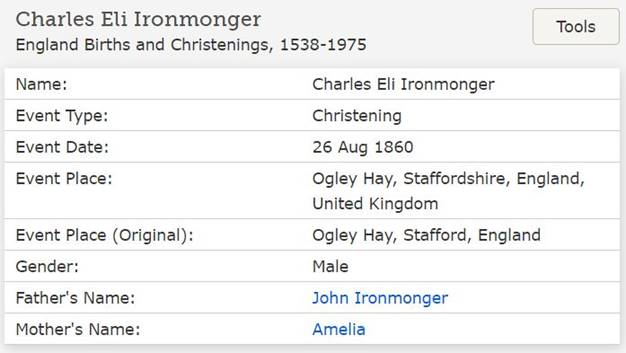 May 1870 - Death of mother, Amelia, who was buried at St James, Ogley Hay with Brownhills, Staffs

1899
22nd September, Birth of daughter, Amelia Ironmonger, at the Wilkin, Brownhills and who was christened at Ogley Hay on 10th November 1899.

Charles sailed to Canada on the Empress of Ireland sailing from Liverpool to St John with sons, William, Samuel & Charles.

Charles’ eldest son , John, made the journey to Canada in July to join his father and brothers.

He was joined by his wife, Sarah, in September, who sailed on the Empress Of Britain on 9th September 1910 with children Amelia,10, Eli,9, Ezra, 3 and George, 1.

19th June 1914 – Tragedy struck the family when three of their sons were at the Hillcrest mine during a series of explosions resulting in the rescue of John and the deaths of Charles & Samuel along with 187 other men.